Supplements: From the Earliest Essays to Being and Time and Beyond (Suny Series in Contemporary Continental Philosophy) 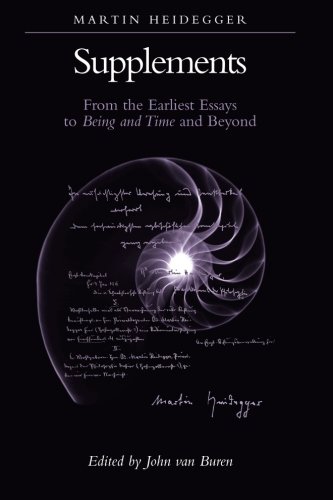 This indispensable volume adds for the first time a comprehensive anthology of the most important of Martin Heidegger’s recently discovered early essays. Translated by preeminent Heidegger scholars, these supplements to Heidegger’s published corpus are drawn from his long series of early experimental, constantly supplemental attempts at rethinking philosophy. Written during 1910-1925, they precede Being and Time and point beyond to Heidegger’s later writings, when his famous turn took, in part, the form of a return to his earliest writings.

Included are discussions of Nietzschean modernism, the mind’s intentional relation to being and the problem of the external world, the concept of time in the human and natural sciences, the medieval theory of the categories of being, Jaspers’s Kierkegaardian philosophy of existence and its relation to Husserl’s phenomenology, being and factical life in Aristotle, the being of man and God in Luther’s primal Christianity, and the relevance of Dilthey’s philosophy of history for a new conception of ontology. A detailed chronological overview of Heidegger’s early education, teaching, research, and publications is also included.

There are no reviews yet.

Be the first to review “Supplements: From the Earliest Essays to Being and Time and Beyond (Suny Series in Contemporary Continental Philosophy)” Cancel reply

Added to wishlistRemoved from wishlist 0
Add to compare

Added to wishlistRemoved from wishlist 0
Add to compare
£8.36

Supplements: From the Earliest Essays to Being and Time and Beyond (Suny Series in Contemporary Continental Philosophy)